The Normandy Shipyards (Chantiers Navals de Normandie) are located at the bottom of the level basin of the merchant port of Fecamp, on the Alabaster Coast, in the department of Seine-Maritime. Their story begins a little before the great saga of deep-sea cod fishing on the banks of Newfoundland, in Canadian waters, in the last century. (version française ici)

The end of this great epic will mark the end of these shipyards. More details below the following slide show.

The Normandy Shipyards were born on March 1, 1928 by the will of two naval architects : Charles CHANTELOT and Henri LEMAISTRE.

The Chantiers Navals de Normandie built a number of pilot boats, lifeboats, yachts, motor boats and… cod fishers in the heyday of cod fishing on the banks of Newfoundland.

To see in pictures the boats and ships still sailing, I recommend the following pages from the website Chantiers Navals de Normandie. On the right of the page you will find the color links (the names of the boats) to the boats and their images, including those of their restoration for some.

The site closed its doors permanently in 1965.

Attempt to relaunch the shipyard in 2011

En 2011, the Parisian naval architecture firm LEBEFAUDE attempted to relaunch this shipyard by betting, among other things, but reasonably, on the expected greening and strengthening of the river fleet in the Seine Valley, but not only. Unfortunately the share of road in land transport in France still happily exceeds 80%, the commitments of the COP21 as the billion-dollar plans of the last 30 years of our dear politicians do not change anything in this state of affairs.

This attempt to relaunch this site ended in 2018 in judicial liquidation. 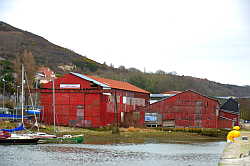 Between the early 2000s and today, the aesthetics of the site have changed dramatically, but the basics are still there: the three platforms and the main slipway.

But for how long ?

The Chantiers Navals site still in a state of being relaunched

Since 2013 and the demolition of part of the buildings by the Chamber of Commerce of Bolbec-Fecamp (now disappeared and replaced by that of Fecamp-Port-Jerome-sur-Seine), only an association for the defense of the local maritime heritage and the relative benevolence of the cultural services of the City of Fecamp allow this site to exist in a form that allows a new start. Only the candidates and the financial means are missing. It is probably from the Union of Goodwill that the saving project will emerge which will succeed in saving a piece of history of this ancient Viking capital (911-1202). It would be a shame if the only local vestige of this part of history is the frame of the Gothic room from the Palais de la Bénédictine…

When will happen a "Back to the Future" in the maritime industry ?

In Syria, on an island, wooden ships have been built since the Phoenician era !

In United Kingdom like in the USA we still build wooden ships, so why not in France ? Why not in the former capital of the most adventurous and talented sailors in human history ? ! ?

One of the world's largest marine vehicle carriers is embarking on a "return to sailing".

So quite logically, if TOWT was at its launch a "project of sweet dreamers", it still seems that they initiated a movement, dont’t you think so ?

Now if you hear any snickering or coughing you can always finish them off by getting them to read the "chef's special" !

Who to contact in case of interest by this relaunch of the ship building activity ?

Depending on the nature of your interest :

The Association which manages the project to relaunch the Chantiers Navals de Normandie by building a dundee:

The Fecamp Chamber of Commerce which manages the commercial port by Delegation of the Department of Seine-Maritime :

The brand new brochure from The Independent Dunde Project.